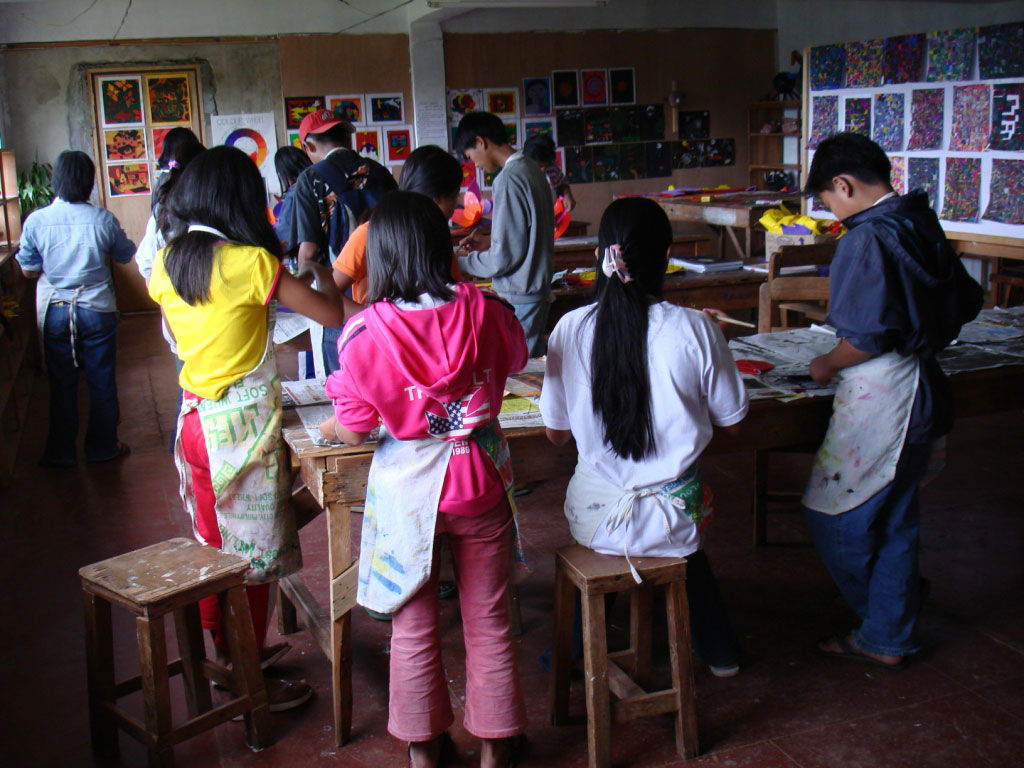 St Mary’s is an old school, built and staffed by the first Episcopalian missionaries who arrived in Sagada in 1902. For many years, the standard of education was very high with English widely and very well spoken. After direct American involvement ceased, the school slowly became run down, and student numbers dwindled. In 2004, Dennis Faustino, who had been Vice Principal of the International School in Manila for 12 years, stepped in to rescue and revitalize the school. This he has done and now it is one of the few secondary schools in the Cordillera Region offerring Music, Art, Physical Education and Health as part of the compulsory curriculum.

The student population of around 200 insures that everyone knows each other and the class sizes are small.  While I was there, Art became a compulsory subject in the curriculum for years 7 and 8, as well as offerred as an elective in year 10.  As the Philippines still maintains a 10 year education program, students are graduating High School at age 16 or younger.

Sagada is situated in the remote and mountainous North, so students are drawn to St Mary's School from far and wide. Children from small farming villages, other provinces, nearby towns and Sagada itself populated our school.   The Igorot culture is strong and ritual life played a big part in our school activities.  Playing of the gongs, dancing, traditional dress and community feasts punctuated the school year.

The tradition of excellence in all things lives on in Sagada.

I joined the school at the same time as Dennis Faustino. He inspired me, financed me and encouraged me to build the Art Department of St Mary’s School into one of the finest in the region. In Sagada I worked with children and young adults who are funny and fun-loving, helpful, considerate, excited by art and very respectful. I watched their faces show the surprise of discovering tracing paper and symmetry, or as they lifted the finely balanced mobile to watch it bob and turn as it should. I love my work

Almost all of the students who first come to St Mary’s have never painted or experienced art as a subject in school. Everything is new to those who have come from remote villages or other small towns to live in the dormitory. They are shy and don’t talk to me, but they are very excited when a big piece of paper and the paint comes out for their first ever painting, titled ‘A portrait of my family (or friends)’. At the start, year 7 students are embarrassed and cover their work as I go around, but then, a few weeks later, they are singing in class, answering questions and having a good time. This is a teacher’s paradise.

Today, while one of my 1st year classes was working with pattern making, they broke into singing the school song. There is a particularly high note to hit halfway through, which always makes me laugh at the school assemblies. This time, the usual note brought the whole class to a laughing standstill. When they resumed, they came to the line “and closest friends must part”, to which someone called out, “seeya Ben”. So it went on, laugh after laugh, until the song was finished.

After 4 years of High School our students graduate at 15 or 16 years of age.  Many students will not go on with their education, most of those having families that cannot afford such a sacrifice. Living away from home is expensive. Some students excel and recently a graduate was offered a full scholarship at one of the most prestigious education centers in the country to study Psychology. Another has gone to the national university to study Chemical Engineering. I know of four graduates who have pursued a direction related to their experiences with art. Two are studying Civil Engineering (thanks to the technical drawing teacher) and two have entered university, one on her way to becoming a fashion designer, the other studying Fine Art.